At Urban Barrel, we are all for making things legendary. Whether you enjoy barrel aging your spirits, beautifully executing one of our signature cocktails, or topping your Caesar with our one-of-a-kind Rim Rimma, we’ve got you covered. Now we’re going to the dogs. Literally.

One of the most iconic images of the barrel in popular culture comes to us courtesy of our four-legged friends, the Saint Bernard. As early as the 19th century, evidence can be found of these loyal canines carrying casks around their necks. Why, you may ask? Well, take a minute to mix yourself a drink and we’ll tell you the story of the barrel, the breed, and the boy that started it all.

Our legend begins early in the 11th century when a monk named Saint Bernard de Menthon founded a hospice and monastery in the Alps between Italy and Switzerland. The mountain range was demanding at the best of times but became treacherous every year during the winter months. For centuries the monks of the Great Saint Bernard Pass lived out their pious lives in relative isolation, tending to and guiding the occasional guest through the area. Later, sometime between the 16th and 17th centuries, the monks acquired large dogs from the village to help them in their quest to rescue and care for their more adventurous visitors. This is where our tale truly begins to take shape. 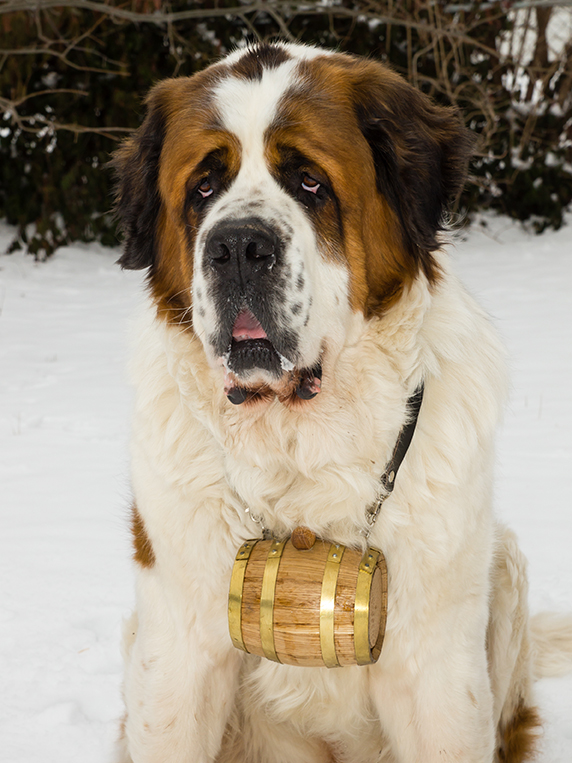 Popular legend dictates that in the 1800s, one of these adventurous travellers was a young English painter by the name of Edwin Landseer. If you haven’t heard of Landseer, don’t worry — chances are that you have still seen the fruits of his labour. His 1820 painting Alpine Mastiffs Reanimating a Distressed Traveler is widely credited as the pioneer of what would later become a pop-culture sensation: The heroic, barrel-sporting Saint Bernard. By this time in history, the breed was frequently taking part in Alpine rescue missions: sniffing out buried hikers, licking them awake, barking for attention, and keeping them alive with the warmth of their bodies and (supposedly) the brandy they carried in the barrels around their necks. While modern science has since debunked the myth that alcohol actually warms the body (proving, in fact, the opposite to be true), Saint Bernards have maintained their status as barrel-toting mountain rescuers to this very day.

It is true that Canada may be a long way from the Alps, but there is no denying that dogs continue to provide comfort to many families across the country and around the world. This is why Urban Barrel has released new Saint Bernard Barrel Collars for large and medium dog breeds. Born from a unique cocktail of history, passion for oak-aging and loyalty to man’s best friend, the Saint Bernard Barrel Collars are secure, fully functional, and truly one of a kind.

No matter whether you are aging gin, whisky, rum, or the traditional brandy, why not help the legend live on and bring your canine companion into the mix? After all, they are the heroes of your home.

Always great to learn fact from fiction while enjoying the fruits of one’s labour.

You need to ask yourself, what do the distillers d

Big shout out to the lads at North of 7, we love y

Surprise your loved one with a Oak Aging Barrel.